TouchBattleTankSP–FreeEdition 1.2.0 APK for Android – Download – AndroidAPKFree [About this game]
Tank Fighting Game, the highly popular downloadable game for Nintendo 3DS, is now available on your smartphone.
Control your tank using the cursor on the screen. Fire by touching the desired point on the screen. With this intuitive operation, anyone can play the game.

Easy rules: players must destroy all enemy tanks in a stage to complete the stage.
Enemies attack with a variety of weapons, including normal shots, ricochets, guided missiles, mortars, and more.
The player’s power-type tank is equipped with charge shots that destroy and go through walls! Speed-type tanks are agile, faster than missiles!?, and capable of jumping over enemy missiles (jumping tanks!).
Set in the near-future, this action shooter tank battle game lets players experience the hottest battle action they’ve ever seen!

[Mission]
Two different mission levels are available in this game. The player can start from either level.

– Speed-type (Red tank):
Weak attack and armor, but agile with rapid-fire shooting. It is suited for advanced players.
Slips between enemy rounds and fires shots that ricochet off walls.
Touch two points on the screen at the same time to jump to avoid enemy rounds.
Attack power: 1 Life: 3

– Intercept rounds type (Black enemies):
Fires intercept rounds that go through any obstacle. If the player’s tank is close to the explosion when this round lands, the tank suffers one damage even if the player avoids a direct hit.
Attack power: 3 Life: 5

– Boss type (Giant enemy):
A giant enemy tank.
The color indicates the attack method, which is the same as normal-size tanks of the same color.
If the player’s tank comes into contact with this tank, the player’s tank will be crushed.
Attack power: 3 Life: 10

Download TouchBattleTankSP–FreeEdition Free .APK file by clicking on the download button above. Let other’s know if you liked the modded game by commenting. 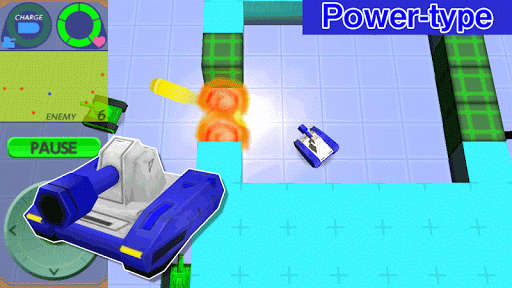 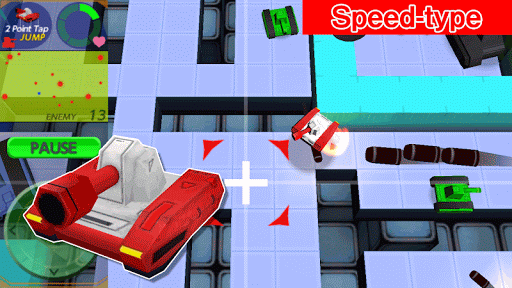